Unless a grain of wheat dies

Before entering the pastorate, I worked in the field of science, where we were very reliant upon our testing equipment. If the equipment gave a wrong reading, due to wear and tear, the ramifications could be extremely costly. Therefore, it was vital that the equipment was regularly calibrated to ensure no unpleasant surprises. The Christian life is a little like that testing equipment. We need to be ever vigilant to regularly calibrate ourselves against the Word of God, especially in times such as these, when our faith seems to wane due to fear, frustration, and despondency.

Jesus, as He neared the crucifixion, told a little parable that packs a mighty punch and is ideal for recalibrating our spiritual perspective. Jesus said:

“The hour has come for the Son of Man to be glorified. Truly, truly, I say to you, unless a grain of wheat falls into the earth and dies, it remains alone; but if it dies, it bears much fruit.” (John 12:23-24)

From our vantage point we understand what Jesus meant. Indeed, throughout His life He performed miracles and spoke words that no other person had ever performed or spoken. Yet, Jesus’ glorification did not come through these things. Rather, it came through His resurrection and ascension to the throne in heaven, but most importantly, through His death. The grain of wheat in the parable is Jesus, who had to die to bring forth an abundant harvest of souls into His kingdom. Take this in for a moment. Christ was glorified through His excruciating suffering on the cross, as He willingly obeyed His Father, atoning for the sins of His people and bringing them into His eternal kingdom. The glorification of our Lord came through obeying the Father in death. There was no other way. 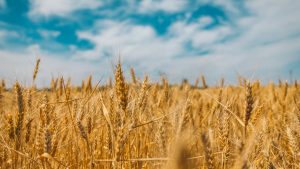 We don’t like to hear this, but since a disciple is not greater than his master (John 13:16), we too must die. We died when we came to Christ and we must die every day as we live for Christ. Through this Christ is glorified. What does this look like? Jesus goes on to say that it looks like having a hatred for the world and a willingness to follow Him (John 12:25-26). This hatred is not so much a contempt for the world, as it is a total lack of dependence upon it. It is a realization that we are simply pilgrims passing through it while our eyes are fixed upon Christ, the object of our faith.

As we face uncertain times, times that may bring us face-to-face with difficulties we never thought imaginable, know that we can meet them in the confidence that they are working in us death so that Christ’s life may spring forth in a glorious harvest. This is the yielding process which Paul knew only too well when he said, “But we have this treasure in jars of clay, to show that the surpassing power belongs to God and not to us” (2 Cor 4:7). Amen!