Chapter 2 – The Doctrine of God

We cannot fully understand everything about God, but the Bible teaches us that we can know Him (Jer. 9:23-24). The only reason we can know who God is and what He is like is because He has told us. If God did not do this, we would never be able to know Him. Who is God? God is the maker of the “heavens and the earth” (Gen. 1:1), He makes everything in the universe work (Neh. 9:6), and He rules over the entire universe (Psalm 115:3). The Bible says that there is one God (Is. 44:6). You might notice that the world is filled with many “gods” but these are idols that people have made. Even though there is only one God, He exists in three Persons – God the Father, God the Son, and God the Holy Spirit (2 Cor. 13:14). We can call these three Persons the Holy Trinity.

Who is God the Father?

God the Father is the first Person of the Holy Trinity. He is called the Father because of His relation to the secon 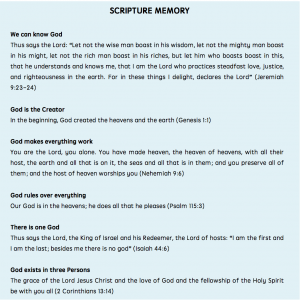 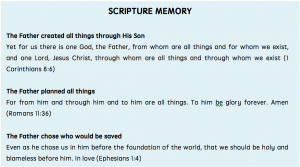 Who is God the Son?

God the Son is the second Person of the Trinity. Like the Father, the Son (the Lord Jesus Christ) has always been around (John 1:1-2). He was appointed by the Father to come into the world and become a man. He lived a perfect life on earth without ever sinning! He suffered and became a sacrifice on the cross for sinners. He died, was buried, came alive again on the third day (1 Cor. 15:3-4), and went back to Heaven and is seated at the right hand of the Father (Heb. 1:3). Jesus Christ is the only way we can receive salvation from sin (John 14:6). 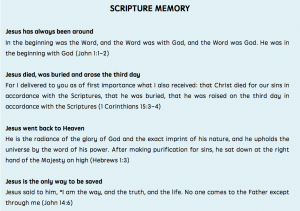 Who is God the Holy Spirit?

God the Holy Spirit is the third Person of the Trinity. He shows people how wonderful the Lord Jesus Christ is (John 16:14) and He helps sinners believe in the Son of God. When someone believes in the Son of God He gives him or her gifts so that they can encourage other Christians (1 Cor. 12:7). The Holy Spirit lives within every Christian and helps them become more like the Lord Jesus Christ (John 14:16-17; Rom. 8:14-17). 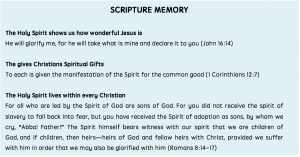