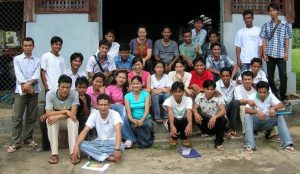 Cambodia has a country of 16 million people and borders Thailand, Laos and Vietnam. The people of Cambodia continue to struggle with the long-term effects of the mass genocide by the Khmer Rouge in the 1970s as well as a 13-year civil war from 1978 to 1991. According to Operation World, about 83% of the population is Theravada Buddhist. The past 20 years have seen unprecedented church growth in Cambodia, though only 1.6% of the population are evangelical Christian.

Over the last 5 years HBC has supported the Kampongsom Bible School (KBS). KBS is situated in Sihanoukville, on the gulf of Thailand, about 240kms from Phnom Penh. There they train potential pastors, teachers, and ministry workers. Attached to KBS is a Christian school where they teach many children from the local community. HBC have the privilege of supporting KBS through the provision of funds and yearly pastoral training.